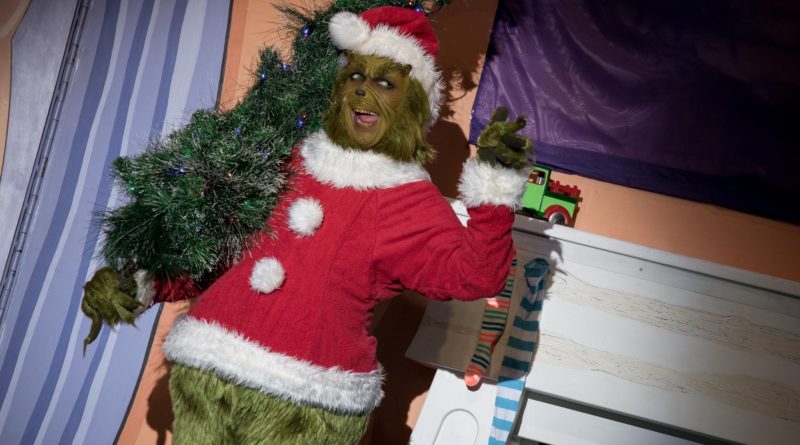 This week’s SATURDAY SIX takes a look at GRINCHMAS in Seuss Landing! A few weeks ago in this fine blog series we took the floo network into Universal’s Wizarding World to see how the witches and wizards celebrate the muggle holiday of Christmas. Today we are going into a theme park land where they take holiday theming “up to 11“…Seuss Landing in Universal’s Islands of Adventure!

Seuss Landing is filled with incredible snack options the whole year round, but for the holiday season their snack spotlight turns and focuses on The Grinch. Several annual treat options return for Grinchmas including  a How The Grinch Stole Christmas “book” cupcake.

Grinch Heart on a Pillow. As you can see in the picture of the Grinch Sugar Cookie picture above, like the book/movie, the Grinch’s heart grew three sizes. The heart itself is a red velvet cake, while the pillow has a mascarpone filling.

The Holiday Punch looks fantastic but unfortunately the praise ends there. It’s like drinking straight lime juice and you wouldn’t want to touch this with a 39-and-a-half-foot pole.

The Grinch Hot Chocolate Bomb has two options available. You can buy the Heart shaped bomb separately to make at home, or buy with a cup of Hot Chocolate complete with Grinch themed cup sleeve.

Drop your Grinch Heart Bomb into the hot chocolate…

…and eventually it will melt away, revealing the marshmallows inside.

At the end you get a great tasting cup of hot chocolate with marshmallows!

If you are a fan of the Grinch character, Seuss Landing is where you want to be during the holiday season as the merchandise selection is… truly amazing, it’s really stupendous, fantastic, bombastic, and downright tremendous!

During the Grinchmas celebration, the Who’s of Who-ville come out to walk the streets of Seuss Landing and they are a complete blast. They are part of the Who-ville Decorating Committee and will often be working in teams to help further decorate the park…and even guests!

They are always ready to have silly photo-ops for you.

Like the fan favorite Citizens of Hollywood from Disney’s Hollywood Studios, guest interaction with the Whos is off the charts fun.

Seuss Landing is already the most colorful and whimsically designed land in any theme park, but the over-the-top holiday decorations take everything to the next level. Everything that you think can be decorated is completely decked out, and then they kept going. It’s AMAZING!

For years, no theme park could touch The Mouse when it came to in-park shows. Festival of the Lion King, Finding Nemo – The Big Blue…and Beyond, and even Beauty and the Beast – Live on Stage are crowd pleasers of the highest order.  When the calendar hits December, Universal brings out some big guns that deliver in a major way.  We discussed Celestina Warbeck’s Nothing Like a Holiday Spell show in our Potter Christmas article, and the New York area of Universal Studios Florida also has the Blues Brothers doing an incredible holiday performance on the streets of New York. Meanwhile over in Seuss Landing, the Grinchmas Who-liday Spectacular is a must-see stage show presentation of How The Grinch Stole Christmas, and it combines elements of both the beloved animated version along with the Jim Carrey live-action film.

Speaking of Grinchmas Who-liday Spectacular, check out this themed signage in Seuss Landing. The entire land eschews straight lines as much as possible, so even this sign pointing guests to nearby bathrooms (because of the barricades installed to direct traffic for the Who-liday Spectacular show) doesn’t use a traditional arrow and instead has a more cartoonish arrow.

With many longtime “Disney Only” guests trying out Universal thanks to the current complexity and cost of Walt Disney World vacation planning, one thing they will discover is that Universal has nowhere near the amount of character dining experiences that Disney has. In fact, outside of the Marvel Superhero Dinner in Islands of Adventure, there’s no other options inside the Universal parks. That is, until Christmas season when Breakfast with The Grinch and Friends returns to Seuss Landing.

The breakfast buffet takes place in Circus McGurkus Cafe Stoo-pendous. Once checked in, residents of Who-Ville will greet you. After being seated, the characters rotate among the tables and you’ll be sure to get quality time with each of them, including The Grinch. Other characters we interacted with during our meal this year included various residents of Who-ville, and Sam-I-Am but in years past we have also seen the Cat in the Hat and Things 1 & 2. Tons of food options, lots of character interactions, and digital photos from an official photographer that are included with the meal? Can’t beat that. Here’s the bad news, word travels fast when something is good in the theme park world, so every single day this breakfast is already sold out. The good news is that we have seen a limited amount of walk-ups accepted, so if you haven’t booked an experience it’s worth at least trying (just temper your expectations that it might be full that day.)

The buffet is loaded with items themed to The Grinch and residents of Who-ville.

In this season’s Holiday Tribute Store in Universal Studios Florida they have a section of the store dedicated to The Grinch and Who-ville.

Definitely a place to go for any Grinch related products you need for the Who on your shopping list.

But also home to the newest addition to Universal’s growing line of Mold-A-Matic plastic molds!

So there you have it: The SATURDAY SIX Looks at GRINCHMAS in Seuss Landing! See you next weekend for the latest installment of the SATURDAY SIX, where we’ll look at something fun from the world of Disney and Universal. If you enjoyed yourself, be sure to check out the THEME PARK ENJOYMENT INDEX, giving a monthly recap of all the theme park news you need to know (and a lot more you don’t need to know, but we’re gonna tell you anyway). You can also follow Your Humble Author on Twitter (@derekburgan).