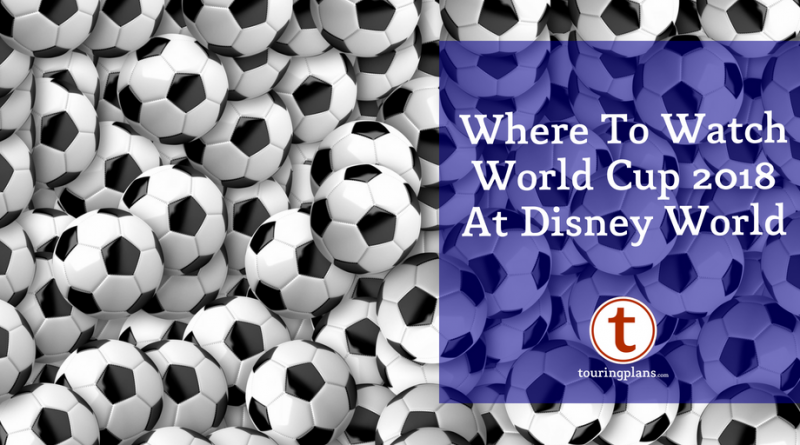 FIFA World Cup, the most watched sporting event in the world, returns June 14 – July 15, 2018. This article will list the announced and anticipated locations to watch the World Cup at Walt Disney World, Universal Orlando Resort, and the surrounding Orlando tourist areas. We will update as new locations are announced to show the World Cup.

Note: This years’ tournament takes place in Russia with simulcasts in the Eastern Time Zone taking place in the morning and early afternoon. Refer to this schedule from CBS Sports for exact times and channels.

Walt Disney World theme parks do not have TVs with access to sports channels. The locations that do have TVs, such as the Tune-In Lounge, have a preset loop of themed programming. If there’s a game you must watch live, pick a day at one of these two parks.

The Odyssey – In 2014, Epcot turned the event space at The Odyssey into a World Cup watch party, an air conditioned football oasis in a sports wasteland. Disney set up several TVs and projectors showing different games, comfy couches, tables and chairs, a draft beer stand, a snack stand, and a small merchandise location.

The Odyssey frequently closed for capacity due to demand. If you want to watch a high-profile game, make sure you show up half an hour early just to be admitted.

Note: Disney has not announced this location as a viewing location for the World Cup 2018. World Cup-themed events have also been provided in 2014 but have not yet been confirmed for 2018.

Rainforest Cafe – While there are no TVs inside Animal Kingdom, the bar space at Rainforest Cafe at the front of the park does have TVs with sports channels. The bar features draft beers, bottled beers, and mixed drinks along with the standard Rainforest menu. TVs here will likely be on the most prominent game of that hour, so if you have money on the Panama vs Tunisia game (or you want to hear the game), look elsewhere.

Most moderate and deluxe resort lobby and pool bars, such as the River Roost Lounge at Port Orleans Riverside and Gurgling Suitcase Libations and Spirits at Old Key West, feature flat screen TVs with cable access. Check with the front desk for designated viewing areas and to verify which bars have TVs.

Geyser Point, The Wave, and Outer Rim feature multiple TVs and is our recommendation for guests watching lower-billed matches.

At first glance ESPN Club sounds like a safe choice to watch a match: hundreds of TVs in the restaurant and restrooms, a good food menu, and a great beer selection. Problem is hundreds of other guests also have this idea causing long waits and slow service. We recommend one of the locations listed below instead.

Coronado Springs remodeled its nighttime lounge into Rix Sports Bar & Grille. Lounge seating has been removed with four person tables and dozens of TVs added. The food is nothing to write home about and overpriced, so find food elsewhere in the resort before a match.

Splitsville – For the ultimate viewing experience at Disney Springs check out Splitsville. Its food menu includes burgers, pizza, steaks, sushi, Mexican, Italian, and BBQ items while the drink menu covers mixed drinks, beer, and wine. Splitsville is liberally decorated with flat screen TVs, including TVs at the bowling lanes. Most guests won’t think of this location when looking to watch a match, but it is a great pick while at Disney Springs.

House of Blues– If Splitsville is too crowded, check out House of Blues, which features TVs at the bar and a good food selection.

The BOATHOUSE – Want raw oysters and fine wine while watching a match? Check out Boathouse’s main bar for several TVs. The food selection is excellent, if expensive, and it’s consistently rated one of the best restaurants at Disney Springs.

Duff Brewery – Located in Springfield USA, Duff Brewery has the display TVs on a Simpsons-themed video loop. This location showed World Cup matches in 2014, so ask a bartender if they are able to tune into a match. Because Duff Brewery has a weak food selection, grab some tacos from the Bumblebee Man Taco Truck instead.

Finnegan’s Bar and Grill – The bar side of Finnegan’s has several TVs and features the full restaurant food and drink menu. Since Finnegan’s bar side does not accept reservations, show up 30 minutes prior to a match to guarantee yourself a spot to watch the match.

Backwater Bar – There is one TV in Backwater, the only location to watch matches in Islands of Adventure. Backwater features the full restaurant food and drink menu from Confisco Grille but the bar can only hold a dozen or so people comfortably. You are better visiting a location in CityWalk or a resort.

The two sports bars in CityWalk are showing matches this summer. If either of these locations are full or busy try Margaritaville or Hard Rock Cafe instead. As an added bonus, the large sports stadium screens on NBC Grill & Brew will show matches all day.

Each on-site Universal Orlando hotel will have several locations to watch a match. Check with the hotel for opening times of each location.

BJ’s Restaurant Brewhouse – On the corner of Sand Lake and International Drive, BJ’s offers an encyclopedia-sized menu of beverage and food choices. The food is above average American food while the beer selections, including their own in-house-made beers, are fantastic. The bar area is self seating, so show up 30 minutes prior to a match.

Buffalo Wild Wings – Two locations (one near ICON 360 and another at the intersection of International Drive and Sand Lake), a good beer selection, and a lot of TVs make up for the lackluster food selection. If you must eat here skip the wings and order one of the seasonal items (I’m a particular fan of the Jumbo Pretzel on the appetizer menu).

The Pub Orlando – Located on south International Drive near the Orange County Convention Center, the Pub is a traditional English pub transplanted into Orlando. This is the location for morning matches as The Pub is opening as early as 8 am for the World Cup. The food and drink menu is British inspired with a heavy focus on fish and chips, shepherd’s pie, and other fried foods (but no curry).

Orlando International Airport is the start and end to a lot of vacations–don’t ruin the vibe by missing your favorite match. In the main terminal Home Team Sports will be packed with fans. Instead try the Lobby Bar and McCoy’s Bar and Grille both located at the Hyatt Regency. Once you’ve scanned your shoes and your carry on, check out these restaurants and bars located near the gates:

Are you planning to catch a World Cup game on your vacation? What’s your go-to location, or what team are you cheering for? Let us know in the comments.