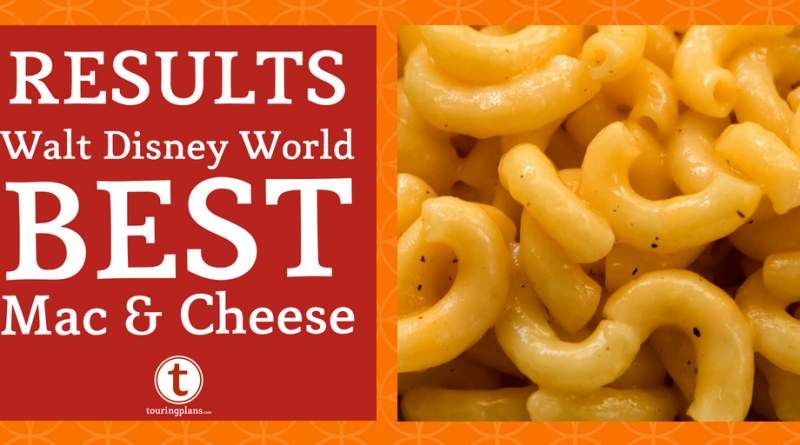 Back in April, I asked readers for their suggestions for mac & cheese to try at Walt Disney World. With the help of three teenagers, we tried twelve restaurants and their mac & cheese. Mac & cheese can be found all across Walt Disney World, from a food kiosk window at the Animal Kingdom to fine dining at Disney’s Contemporary Resort.

Most of the mac & cheese that we tried was good. The only mac & cheese we did not finish and was the clear worst was at Sci-Fi Dine-In. There was way too much of the gelatinase artificial cheese sauce.  It looks like the same mac & cheese served at multiple Disney locations on their child’s meals. Hopefully, this is not the mac & cheese that comes with the Flamed-Broiled New York Strip Steak for $33. If so, substitute your side item.

The Macaroni Gratin at Chefs De France was much better than what Sci-Fi Dine-In offered. There was nothing bad with the French mac & cheese. Flavor was mild and well balanced. The only negative for Macaroni Gratin is its price tag, $18.99.

Many of the mac & cheeses we tried were fine. There was nothing wrong, with these mac and cheeses. but they are not a “must have.”

Jiko – The Cooking Place is a top-ranked restaurant at Walt Disney World. The Oak Grill Filet Mignon, $49, comes with Bobotie Mac & Cheese. The Filet and mac & cheese returned to the menu after guest’s complaints when it was removed. People seemed to love the steak and mac & cheese. I was expecting something special after seeing the backlash after Jiko removed the item from their menu.

The Liberty Tree Tavern at the Magic Kingdom offers mac & cheese as part of their Patriot’s Platter for lunch and dinner. For lunch, you can order a la carte. You can order the mac & cheese for $5 as a side.

The Le Cellier Steakhouse at the Canada pavilion at Epcot is a fan’s favorite. Reservations are a bit easier to get once they changed the steakhouse to a two-credit restaurant. The mac and cheese was good, but for my daily cheese intake, I would take the beer cheese soup over the mac & cheese.

The Animal Kingdom has a dedicated food kiosk for mac & cheese.  Eight Spoon Cafe has three versions of Baked Three Cheese Pasta. You can get the mac & cheese plain, or topped with pulled pork or shrimp. The plain version is only $4.69.  (Sorry that I do not have a picture from our tasting. The kids were starving and devoured it before we found a table. If you are looking for a savory snack, Eight Spoon is a good choice. To give you some idea, this is a photo from our review of Savory Snack Credits in 2016.)

The Polite Pig is a quick service BBQ restaurant at Disney Springs. The breadcrumbs on the top of their mac & cheese gives it a nice smokey flavor.

The BOATHOUSE restaurant is a favorite for many guests to Disney Springs. The restaurant has a wide variety on their menu, and they seem to do everything well. The BOATHOUSE’s mac & cheese has the most complex taste of all the mac & cheeses we tried. There is a slight hint of spice from red pepper flakes and the tang of a beer cheese soup. The $9 side is large enough to share or even be an entree.

Mama Melrose’s Ristorante Italiano is a traditional Italian restaurant tucked in a corner of Hollywood Studios. Mama Melrose puts an Italian twist on their mac and cheese. The four-cheese sauce is like an Alfredo sauce. This is far from a traditional mac & cheese, but is quite good.

The BOATHOUSE and Chef Art Smith’s Homecomin’ have the best mac and cheese at Walt Disney World. Both side items could stand on their own as an entree. The two versions are very different. If you are a traditionalist go with Art Smith.

Do you agree with our ranking? Let us know in the comments.

4 thoughts on “The Best Mac & Cheese at Walt Disney World”