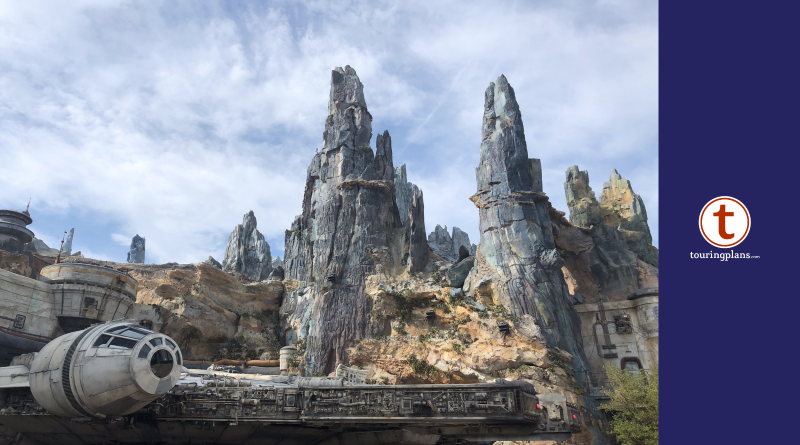 Star Wars: Galaxy’s Edge will open in less than two weeks, and many changes are coming to Disney’s Hollywood Studios. August 29-31 the park will open at 6 a.m., and September 1 through November 2, 2019, Disney’s Hollywood Studios will open at 9 a.m., with Extra, Extra Magic Hours starting at 6 a.m. Currently, all major attractions (not shows) are scheduled to be open for Extra, Extra Magic Hours, but that could change.

FastPass+ tiering also changes at Hollywood Studios starting on August 29, 2019. As usual, guests can pre-select three FastPass+ attractions, and only one of those can be for an attraction in “Group A” below. What’s different starting August 29 is that “Group A” now includes all rides except for Star Tours. The “Group B” attractions are all high-capacity shows.

Star Wars: Galaxy’s Edge is opening with only one ride, Millennium Falcon: Smugglers Run, and it will not have FastPass+. A few other shopping and dining experiences (Droid Depot, Savi’s Workshop, and Oga’s Cantina) in the new land are taking reservations. These reservations are like a FastPass+; the main difference is that the reservation requires a credit card to hold your spot. If you cannot get a reservation, keep checking. People have to cancel their reservations 24 hours in advance to avoid paying a no-show fee (for the droid and lightsaber, no-shows allegedly need to pay the full cost of the missed assembly experiences). You can use the TouringPlans Reservation Finder to look for Oga’s Cantina reservations.

Early fall has the lowest crowds of the year. This will still be true after Star Wars: Galaxy’s Edge opens. Fall break will bring in the crowds, but wait times will be lower than during Thanksgiving, Christmas, and New Year’s. The second Galaxy’s Edge attraction (Star Wars: Rise of the Resistance) will not be open until December 5, 2019. Many people will wait to visit Walt Disney World until after this date, when the land is complete. 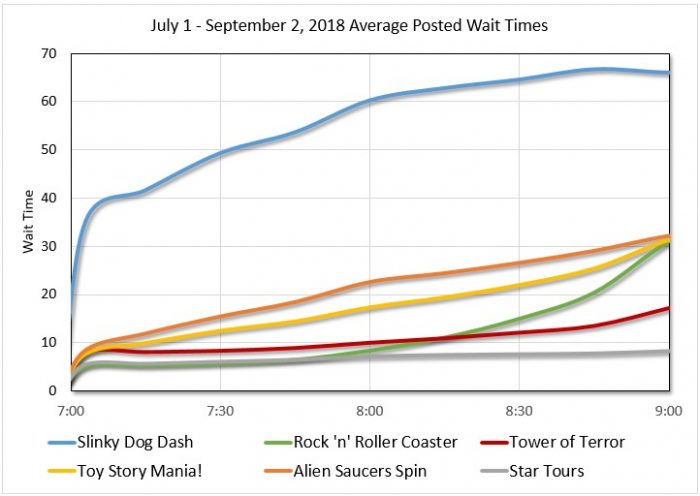 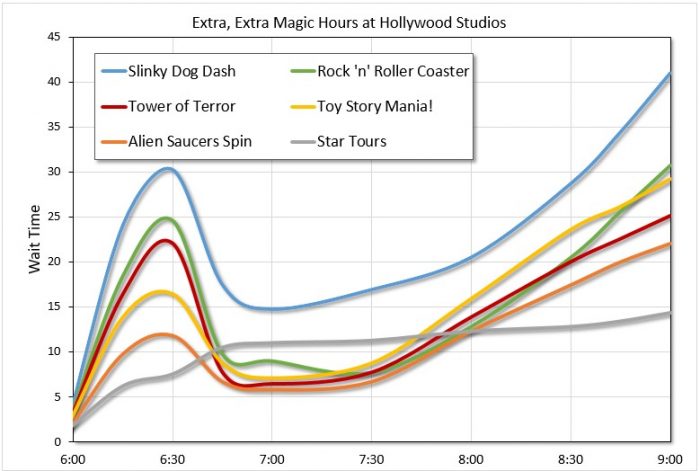 With 3 hours of Extra Magic Hours every day and the park having the extra capacity of Star Wars: Galaxy’s Edge, the wait times at non-Star Wars attraction will be low. We expect that there will be an initial peak around 6:30 a.m., and then wait times will drop off. After 7:30 a.m., wait times will increase. On specific days the magnitude of the curves on the graph will be different, but each day will have a similar pattern.

Most guests will find it challenging to be at Hollywood Studios in time to enter the park at 6 a.m. when Extra, Extra Magic Hours begin. Families are on vacation and they don’t want to wake up before 5 a.m. to be a the park before it opens. I would not be surprised if wait times are even lower than our models are predicting. Most people who do arrive before the park opens will likely head straight to Galaxy’s Edge, leaving the rest of the park empty.

Afternoons are going to be the pinch point at Hollywood Studios. People will have experienced Galaxy’s Edge and will be looking for other things to do. If you don’t have a reservation or a FastPass+, it would be a good time to leave the park.

Touring with and without Extra, Extra Magic Hours

Guests not staying at an Extra Magic Hours-eligible hotel, or who cannot make it to Hollywood Studios before 9 a.m., are going to be behind the crowds. Wait times at Millennium Falcon: Smugglers Run will peak in the early morning. It will be better to wait to go to Galaxy’s Edge later in the day if you cannot arrive before 8 a.m. 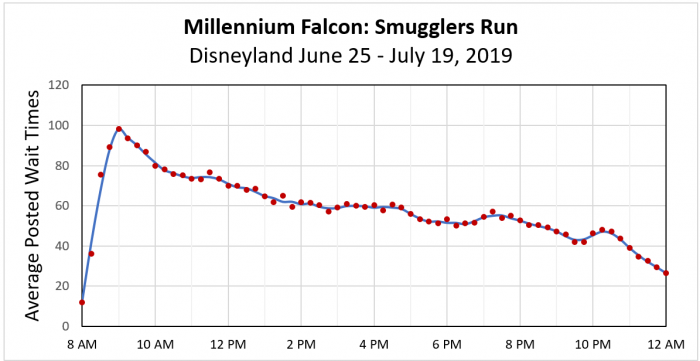 Doing the same attractions, you can wait half the amount of time using Extra, Extra Magic Hours.

If you are not staying at a Disney hotel, there are other options. Here is the list of non-Disney hotels that include Extra Magic Hours privileges.

After using your initial three FastPasses you can make an additional FastPass+ reservation using the My Disney Experience app. Availability of FastPass+ reservations is reduced as the day proceeds. Getting extra FastPasses works best at the Magic Kingdom because it has the most attractions and does not use tiering. Don’t assume you will get additional FastPasses, especially for the most popular attractions.

If you are using park hopping and using Morning Extra, Extra Magic Hours at Hollywood Studios, just skip FastPass+ at that park. Enjoy the low waits in the morning and then use your FastPass+ selections for a different park in the afternoon. The same strategy will work at the other parks as long as you leave by noon.

Disclaimer: This blog post is written before Star Wars: Galaxy’s Edge opens at Disney’s Hollywood Studios. Crowd patterns and wait times are predicted based on Disneyland’s Galaxy’s Edge, other attractions, and other lands. After the new land opens we will learn more about how Hollywood Studios will operate. Our recommendations and predictions will evolve as time goes on.