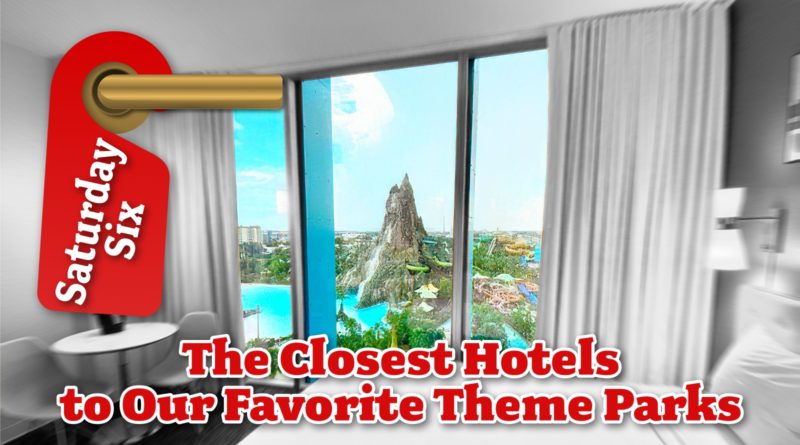 This week’s SATURDAY SIX takes a look at the hotels closest to our favorite theme parks! We all have our favorite reasons for staying onsite at Disney and Universal. Some love the immersive theming of hotels such as Wilderness Lodge or Portofino Bay Hotel. Others prefer the incredible meals you can get at places such as ‘Ohana at The Poly or the acoustic brunch at Hard Rock Hotel. But for many the biggest draw to staying onsite is being as close as possible to our favorite theme parks…

Today we are going to look at the six onsite hotels which are the absolute closest to a Disney or Universal theme park. We are judging the distance from the hotel’s lobby to the front gate of a park. Going into this article I would have thought my beloved Royal Pacific Resort would have been a shoo-in to make the cut. I’ve always considered RPR a hop, skip, and a jump away from IOA to the point where I always just walk instead of taking the complimentary water taxi. Turns out, Royal Pacific didn’t even make the list. Nor did Bay Lake Tower at Walt Disney World, which is a stone’s throw away from the Magic Kingdom. So what is even CLOSER to the parks than these two hotels? Well, let’s check them out, starting with…

We’re going to start off our list in Walt Disney World, in the EPCOT Resorts area.

With the lobby of Boardwalk being 0.4 miles away from the turnstile entrance to EPCOT’s World Showcase, a theme park blogger walking briskly would take about five minutes to make the journey. A guest taking more of a leisurely stroll, or a high maintenance maltipoo that stops every 10 feet to mark the grounds, would make the same walk in about 8 minutes.

While not nearly as close, but still easily walkable, is the distance from the Boardwalk to Disney’s Hollywood Studios. There is a dedicated walkway for onsite guests, complimentary Friendship Boats, and even the nearby Skyliner.

When I was growing up, Disney would often show ads featuring guests looking out their hotel windows into the nearby Cinderella Castle. The ads made it seem like the castle was so close you could almost touch it. Reality slapped me in the face when my parents actually took me to Walt Disney World and I realized I had fallen victim to some clever Marketing Magic. Years later, the Universal Orlando Resort delivered on that promise of a theme park right outside your window when they added the two towers to Cabana Bay Beach Resort. Even better? The park you’re looking out at just so happens to be my favorite park in Florida, Volcano Bay.

All guests staying at Cabana Bay have the opportunity to use a dedicated Resort Guest Entrance at Volcano Bay. 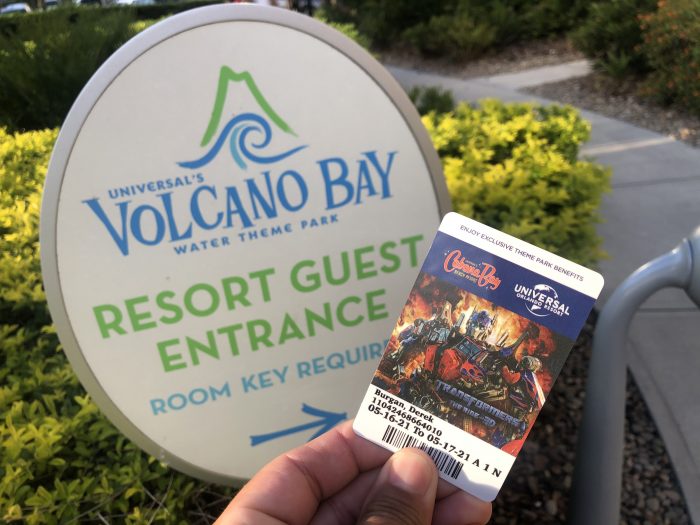 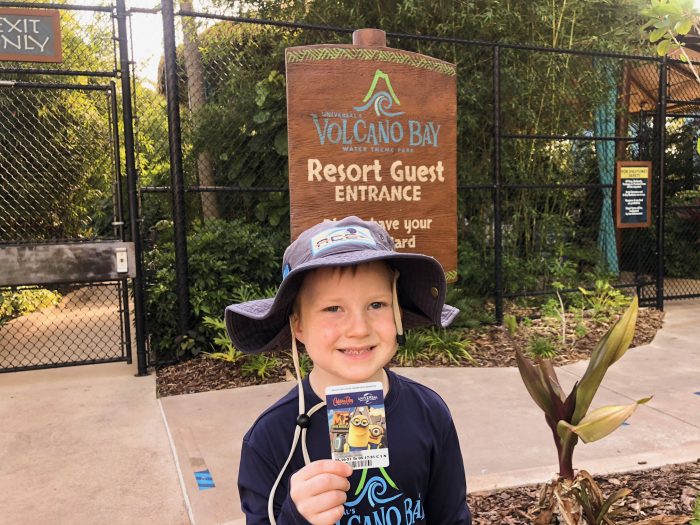 Once past the Resort Guest Entrance security, you are just steps away from the turnstiles at Volcano Bay. Because we are evaluating the overall distance from the Cabana Bay lobby, the distance is 0.3 miles. Most Cabana Bay guests are even closer than that, especially the ones staying in the towers directly next to Volcano Bay.

While I think Cabana Bay Beach Resort may be pound for pound the best theme park onsite hotel when you consider value, amenities, and location, even I am not a fan of the walk to Universal’s other parks (Islands of Adventure and Universal Studios Florida). You can definitely do it – and Universal has the Garden Walk available – but as they say it’s a hike (thankfully there is always a bus waiting for you). At the end of a long day at the parks, that walk is one of the last things I would ever want to do. However, if you are staying onsite at the Hard Rock Hotel, you are just 0.3 miles away from the front entrance to Universal Studios Florida.

You know how I feel about Hollywood Rip Ride Rockit, and guests staying at the Hard Rock get an up close and personal view of this coaster. 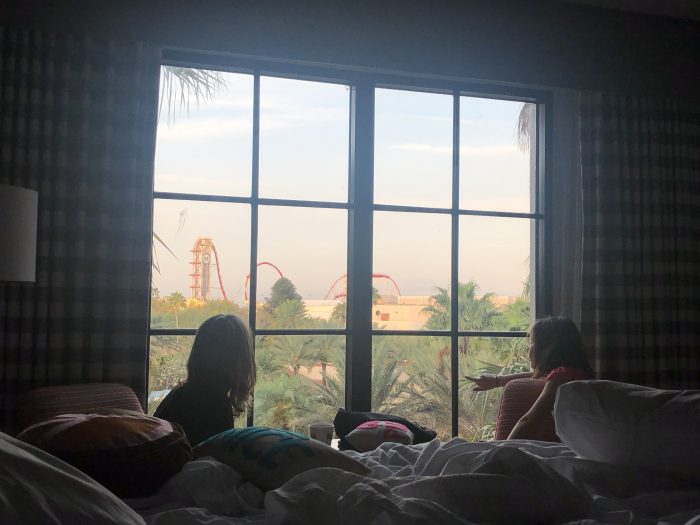 Hard Rock Hotel is also the only resort on this list which is pet friendly, via its fantastic Unleashed program.

The walking path from Universal Studios Florida to the Hard Rock Hotel gives you several options. You can pretty much make a beeline straight from the park into the Hard Rock’s pool area, or take a more leisurely stroll  through the landscape. Until the walk from Islands of Adventure to the Royal Pacific Resort, the route to Hard Rock Hotel allows guests to take multiple paths to enjoy the landscaping.

I personally love to take “the long way” and pass by the gorgeous Butterfly Garden right outside the Hard Rock.

We’re going to head back over the EPCOT Resorts area and check out the one place even closer to the park than Disney’s Boardwalk. In my book, there are many reasons to stay at the Beach Club. The Stormalong Bay pool area is the best pool at Disney. The iconic Kitchen Sink sundae at Beaches & Cream should be on every Disney’s fans bucket list. I can also eat my weight at the Cape May Café breakfast buffet (with the new salted caramel Beach Buns offering being worth going out of your way for). 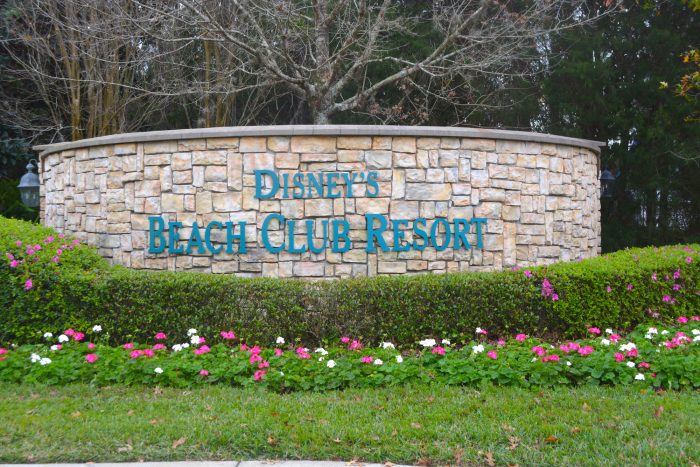 However, most guests will love the fact that the Beach Club is right next door to EPCOT’s World Showcase.

One of the more underrated resort options at Universal is Aventura Hotel. It is sandwiched in-between the aforementioned Cabana Bay Beach Resort and one of my favorite hotels in Orlando, Loews Sapphire Falls Resort. I’m guilty of it myself as I’m often asked by people where they should stay at Universal, and I will spend hours talking about how much I love Cabana Bay and Sapphire without once mentioning that Aventura is a great option as well. The floor to ceiling windows at Aventura give some incredible views of the Universal Orlando Resort and the city of Orlando in general.

Most of the action at Aventura takes place on the ground floor; where you’ll find the lobby check-in, a Starbucks, the hotels’ gift shop, and Urban Pantry food court all within steps of each other. From here you can see the bus drop off area for Volcano Bay (this is also where the park’s security screening is located). 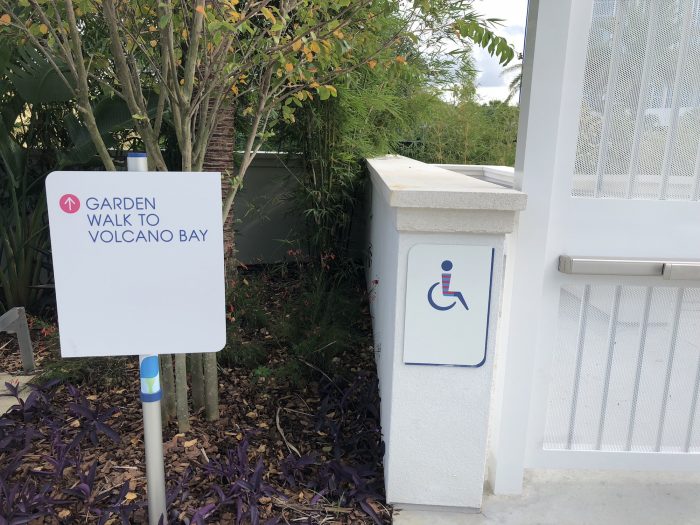 Guests can either walk down the steps above, or take the handicap accessible ramp. On the other side of the chain link fence on the right side of this photo is the security entrance to Volcano Bay.

Whether staying onsite at Aventura or elsewhere on property, be sure to check out the rooftop Bar 17. Aside from a wonderful menu and drink selection, the views it delivers are exceptional. 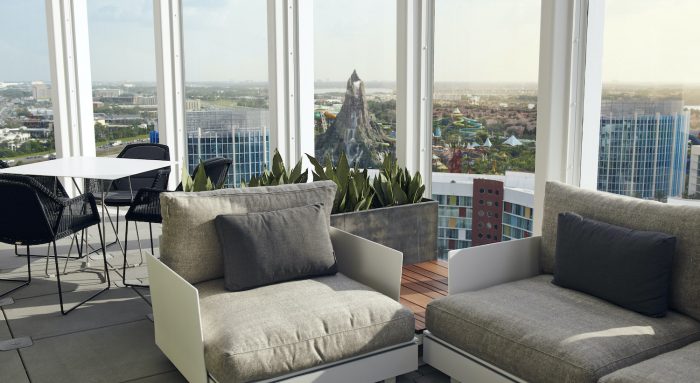 Okay, all the other hotels are a close walk to a theme park, but what about a hotel that lets you walk straight into a theme park? Welcome to the Grand Californian Resort out in Anaheim.

That’s right, Grand Californian allows ticketed guests to enter the park from the hotel to an area in the Grizzly Peak section of  Disney’s California Adventure.

Below @bioreconstruct shows the walking paths available to people staying onsite at the Disneyland Resorts. The green lines show the walkways from the Disneyland Hotel and Paradise Pier Hotel to the main entrances of Disneyland and DCA (the very top center of the photo with the two green arrows. The left green arrow is pointing to Disneyland while the right is pointing to DCA) as well as using the Grand Californian entrance to DCA (all ticketed guests of the park can use this entrance).

HONORABLE MENTION – Off Site Hotels to the Disneyland Resort

Unlike Walt Disney World in Florida, the Disneyland Resort has several offsite hotels within an extremely short walking distance to the parks. While this fine blog series subscribes to the theory of “onsite or bust,” I can definitely see the value in staying offsite and being that close to a theme park. I would encourage anyone looking into Disneyland area hotels to follow TouringPlans’ own Guy Selga along with Tom Bricker of the Disney Tourist Blog for advice on which ones to book and which ones to steer clear of.

We’ll be doing an update on EPIC Universe in this very pages shortly, but one thing that is part of Universal’s newest theme park is a hotel that will be connected directly to the park. This will be the first stateside Universal theme park designed and built with a hotel component in mind, and we are surely going to be getting an amazing experience like no other. We are counting down the days until we can walk straight from our rooms into the hub of Epic Universe!

So there you have it: The Six Closest Hotels to the Theme Parks! See you next weekend for the latest installment of the SATURDAY SIX, where we’ll look at something fun from the world of Disney and Universal. If you enjoyed yourself, be sure to check out the THEME PARK ENJOYMENT INDEX, giving a monthly recap of all the theme park news you need to know (and a lot more you don’t need to know, but we’re gonna tell you anyway). You can also follow Your Humble Author on Twitter (@derekburgan).

5 thoughts on “SATURDAY SIX: The CLOSEST Hotels to Our Favorite Theme Parks”