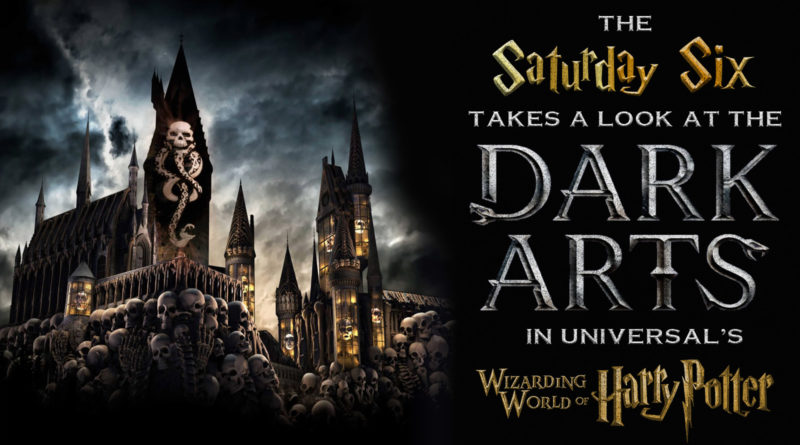 This week’s SATURDAY SIX takes a look at the DARK ARTS in Universal’s Wizarding World! One element of the Harry Potter Universe that strikes a chord with fans of all ages are the four houses of Hogwarts: Gryffindor, Hufflepuff, Ravenclaw, and Slytherin. Students at Hogwarts are sorted into one of the four houses that best aligns with their personalities, and abilities. Some of the traits of the houses include bravery & adventurous (Gryffindor,) loyalty & empathy (Hufflepuff,) intelligence & wit (Ravenclaw), and ambition & resourcefulness (Slytherin.)

Several years ago, the website Pottermore (created by the author of Harry Potter) had a Sorting Hat experience where visitors to the site could see which Hogwars house they would be sorted into. Your Humble Author, being a huge fan of the Harry Potter books, films, and theme parks, was ready to try… 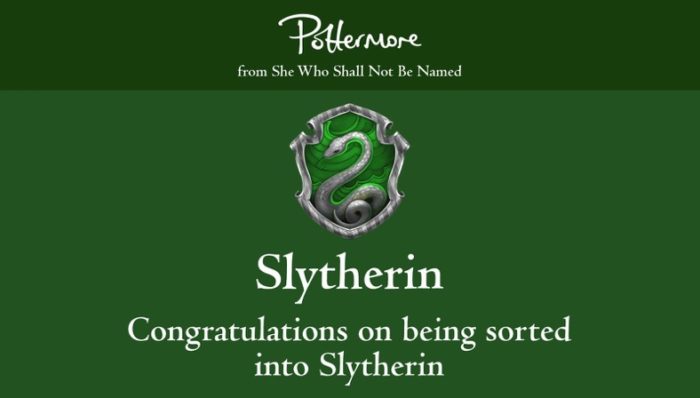 Going into the Sorting Hat experience, I always pictured myself as a Gryffindor. However, this result actually should have come as no surprise considering I live in Florida, root for the San Diego Los Angeles Chargers, and will defend Hollywood Rip Ride Rockit to the death, all classic traits of a Slytherin. Turns out that the art of theme park blogging is also one of those professions that naturally attracts Slytherins, much like the mafia, timeshare sales, and YouTube influencers.

Once I was “officially” a Slytherin though, I embraced it. Trips to the Universal’s Wizarding World took on new meaning, as I started to look for things in the parks that targeted Slytherins, starting with…

The good news is, no matter what Hogwarts house you’ve been sorted into, you’re going to find a lot of great merchandise geared towards you at Universal Orlando. The even better news is: if you’re a Slytherin or Gryffindor, you will have a metric ton of options to choose from. The image of a snake is synonymous with Slytherin – including being part of the house crest – so you will find a lot of options that have a snake incorporated into the design.

A snake is incorporated into the Dark Mark, the symbol of Voldemort. Death Eaters (followers of Voldemort) have the Dark Mark burned into their skin as a sign of allegiance. SURPRISE, Voldemort was a Slytherin, as were Bellatrix Lestrange, Lucius Malfoy, and Dolores Umbridge.

Outside Weasleys’ Wizard Wheezes in Diagon Alley, you’ll see this logo for the Edible Dark Mark.

This is referencing a pretty iconic Potter snack at the parks, the Edible Dark Mark lollipop.

There’s a Dark Mark interactive wand, but we’ll get to that later in the article…

When the original Wizarding World of Harry Potter – Hogsmeade Village opened back in 2010, one of the biggest debuts it had was it was the first place anywhere which gave us visual representations of the Four Founders of Hogwarts (Godric Gryffindor, Rowena Ravenclaw, Helga Hufflepuff and Salazar Slytherin). In fact, when the iconic Chocolate Frog snack made its debut, guests would randomly get one of five Wizard cards featuring either Dumbledore or one of the Four Founders of Hogwarts.

During the spooky season of the year, Universal adds an extra bit of evil to Islands of Adventure with the Dark Arts at Hogwarts Castle projection show. However, before that show starts the “pre-game” includes Death Eaters walking the grounds of Hogsmeade Village. This is significant because – outside of the Hogwarts Train Conductor – there are no Harry Potter-related walk around characters in the Wizarding World.

Similar to Halloween Horror Nights scareactors, the Death Eaters – while vile to the core – do have the common courtesy to stop and pose for Muggle pictures and selfies. To be fair, this is completely consistant with the character of a Slytherin as you are appealing to their narcissism and vanity.

Nighttime shows at the theme parks which involve projection technology are getting better and better. I loved when Happily Ever After show made its debut at Disney’s Magic Kingdom along with the amazing Tree of Life Nighttime Awakenings at Animal Kingdom. So of course Disney immediately changed HEA into a far inferior version with Enchanted and stopped doing the projection shows on the Tree of Life. Over at Universal’s Islands of Adventure, during the Spring and Summer they have the Nighttime Lights at Hogwarts Castle nighttime show, but during the spooky season the show transforms into the Dark Arts at Hogwarts Castle show.

The show begins with Dumbledore talking about dark magic, before going through a series of projections based on the evil/creepy side of the Harry Potter Universe, starting with the Borgin and Burkes store in Knockturn Alley. The rockwork that Hogwarts Castle “sits on” has skulls projected on in it during this segment and it is a pretty great effect.

The show may be a little intense for young Potter fans, as there is a scene involving spiders, and later we’ll see man-eating vines, Dementors and Death Eaters as well.

He Who Shall Not Be Named makes an appearance in a graveyard saying “I’m going to destroy you. after tonight no one will ever again ever question my powers…”

Voldemort casts the Avada Kedavra spell and pyro explodes, along with projections making it appear that Hogwarts Castle is crumbling.

Thankfully, Dumbledore makes an audible appearance once again at the end, and evil is thwarted back by the patronus of a certain Boy Who Lived.

You can definitely see the pyro effects of the show from all across Universal Orlando property.

It is very rare for us in the theme park world to have an area to celebrate the bad guys. There’s Gaston’s Tavern in the Magic Kingdom and Villain’s Alley in IOA’s Marvel Superhero Island and that’s about it.  When I was growing up there was a wonderful retail store in DHS called Villains in Vogue, which focused on items themed to Disney movie villains. However the name of that store has been changed to Reel Vogue and it now sells the exact same merchandise available at about 100 other stores on Disney property. Not all is lost though, not only does Diagon Alley have a section dedicated to the “baddies,” it also  happens to be one of the coolest places in the entire land! Knockturn Alley brings guests into the darkness regardless of the time of day thanks to being completely enclosed. Animated wanted posters of Death Eaters line the cold brick walls and the entire area feels sinister. Borgin and Burkes, the area’s gift shop, is hands-down the creepiest retail store ever created for a theme park. Filled with objects from the Dark Arts (including a vanishing cabinet that Muggles should get close to. You just might hear something…), this is also your go-to place for merchandise dedicated to the villains of the Harry Potter Universe, how great is that?!

Everyone has their favorite parts of the Wizarding World: the rides, the shows, the food…but one thing that has been a huge hit is the interactive wand element. Muggles like us have the ability to cast spells in Hogsmeade Village, Diagon Alley, and even Knockturn Alley. For this you’ll first need to buy an interactive wand. There are several themes available for us Slytherin types, but we went for the Death Eater wand.

Each interactive wand comes with a gorgeous map of the Wizarding World which shows the location of all the spell areas.

…if you hold your spell map up to a black light in Knockturn Alley (found near the entrance if you enter the area near the Fountain of Fair Fortune) you’ll see “hidden” creatures appear!

Let’s flip our map around for a moment so you get a better view of these creatures. Each one is located at a spell area inside Knockturn Alley.

For the interactive wand spells, you’ll find a spell marker on the ground that will coincide with the same area on the map. Each spell marker lists out the name of the spell, along with the motions the wand user needs to use in order to activate the spell. There are five spells available in Knockturn Alley. First up is ALOHOMORA. This is a spell to unlock doors, and many fans of the Potter film series will remember Hermoine Granger used this spell in Harry Potter and the Sorcerer’s Stone. The spell is located at the door to the Trackleshanks Locksmith shop.

We don’t want to give out too many “secrets” in this article, but let’s just say that the spell unlocks this door in Knockturn Alley, and when you go to check the door you just might get a surprise…

Our next spell is MOVING SKELETON, and is one of the most popular spells in all of the Wizarding World. It is located in the window of a shop named Dystal Phaelanges.

For this spell, a skeleton projection will mimic the spell casters movements.

Our next spell is LOCOMOTOER CHIMNEY SWEEP, and for this one you will need to look up in Knockturn Alley for a red sign.

The spell will charm a house elf chimney sweep to “climb” and escape the fire.

Our next spell is INCENDIO and you’re looking for the window of the Tallow and Hemp Toxic Tapers shop.

This is one of the few spells in the Wizarding World which can have different effects each time you cast it. The spell will light a candle which will then in turn affect the caged bird.

My personal favorite spell is MIMBLEWIMBLE, but not because of the spell itself, but because of what it involves. Here you’re looking for the window of Shrunken Heads talking outside the Noggin and Bonce shop. I love these “guys.”

The spell actually shuts them up.

Stay in Knockturn Alley long enough, and you’ll see one of the best references in all of the Wizarding World to the attraction it replaced: Jaws…

The creepy store Borgin and Burkes has a rich history in the Harry Potter Universe, and the Powers That Be at Universal did a bang up job recreating it for us. If the sterile, wide open, and full of generic stuff Creations Gift Shop in EPCOT had a polar opposite, it would be Borgin and Burkes. Confined. Dimly lit.  This store has atmosphere along with a collection of items you won’t be finding in every other store in the park.

Muggles who have watched the Harry Potter film series will recognize many details throughout the store, including the Hand of Glory below.

This shelf contains a cursed necklace…

…the same necklace which was inspected by Professors Snape and McGonnagal after it almost killed Katie Bell.

The Vanishing Cabinet in Borgin and Burkes was a key story element in Harry Potter and the Half Blood Prince. It had a sister cabinet located in Hogwarts Castle and they were how Death Eaters were able to enter the castle. Borgin and Burkes in Knockturn Alley has a recreation of this cabinet.

Keep your eyes open for some pretty amazing items, including Horcruxes such as Rowena Ravenclaw’s diadem, Helga Hufflepuff’s cup, and Salazar Slytherin’s locket.

So there you have it: The SATURDAY SIX Looks at the DARK ARTS in Universal’s WIZARDING WORLD! See you next weekend for the latest installment of the SATURDAY SIX, where we’ll look at something fun from the world of Disney and Universal. If you enjoyed yourself, be sure to check out the THEME PARK ENJOYMENT INDEX, giving a monthly recap of all the theme park news you need to know (and a lot more you don’t need to know, but we’re gonna tell you anyway). You can also follow Your Humble Author on Twitter (@derekburgan).

Next Week: The RETURN of the SAT SIX Book Club! 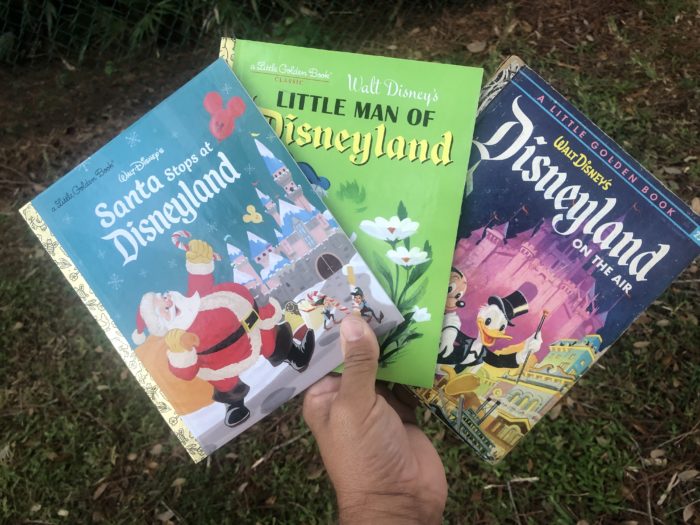 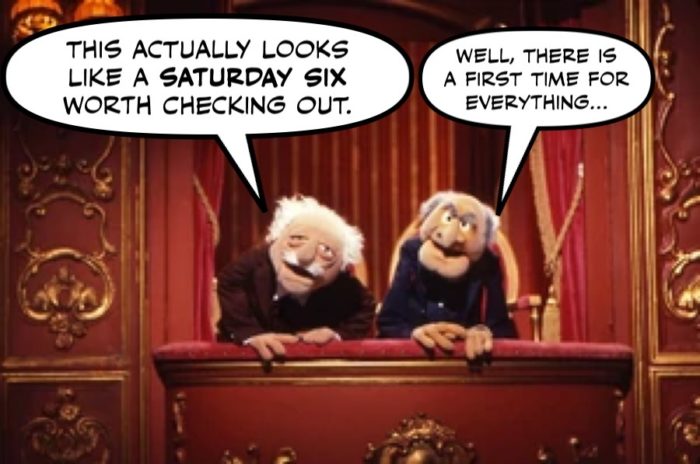