The best attraction at Walt Disney World is an unwinnable debate. The answer is different for everyone, and everyone’s answer is correct because it is a matter of personal preference. Of course, if you believe many of the hundreds of Disney message boards (please don’t), there are only a few opinions that matter. One of the viewpoints that is rarely considered is that of the small child, which is odd because there are certainly a lot of small children patronizing Disney World.

My feeling is that small children (under five) are not fully represented because they do not often have a voice. They cannot visit message boards, and their righteous indignation only lasts until nap time, so they are often forgotten when the value of an attraction is considered. I have decided to employ my three and a half year old daughter to help change that and help show a different perspective on some Disney World attractions.

As those of you with children know, it is next to impossible to get an accurate answer to any question out of a three year old. The child’s current mood, the order of the choices, and a thousand outside influences all make the answer highly variable. To combat this I asked her many, many different times over the course of two weeks and supplemented the questions with pictures, videos, and The Unofficial Guide: The Color Companion to to Walt Disney World (yeah, that’s a plug…buy it!). The result is a ranked list of attractions that I feel comfortable saying represent her favorites. The exact order may be a little different, but I am not sure I could form a fully accurate list of my favorite attracions either.

As much fun as it would undoubtedly be to go through every single attraction, you would probably get bored with a 10,000 word blog post. So, in order to control my wordiness, here are the attractions that she likes that finished just outside the top 20: The Enchanted Tiki Room, Living With the Land, Journey into Imagination, Festival of the Lion King, Haunted Mansion, Pirates of the Caribbean, Tower of Terror, Gran Fiesta Tour, Tomorrowland Transit Authority PeopleMover, and TriceraTop Spin. All of these are attractions that she is very willing to go on, but are not among her favorites.

I should stop and mention two things: firstly, my daughter is over 40 inches (opening her up to quite a few more attractions). She also is afraid of just about nothing, hence Tower of Terror being present on this list.

20. The Barnstormer– I would say this is actually one of my daughter’s favorite rides, but it was under refurbishment for so long that it has been over a year since she has ridden it (almost 1/3 of her life). It is a perfect starter coaster and it would be further up this list if she hadn’t almost forgotten about it.

19. Tomorrowland Speedway – This ride is loud, smells funny, loads very slowly, and takes up a lot of prime real estate…so why is it still there? Oh yeah, because for a kid getting to drive a car is awesome!

17. Disney Junior Live on Stage – Since this was made for the little ones, it is no surprise that my daughter loves it. Any kid that watches the Disney Junior shows (Mickey Mouse Clubhouse, Little Einsteins, Handy Manny, and Jake and the Neverland Pirates) will go crazy for this.

16. Voyage of the Little Mermaid – Yes, my daughter is princess obsessed. This one was always going to be a favorite, as are all of the meet and greets (which were not considered for this list). As far as my 3 year old girl is concerned, there can not be enough opportunity to meet a princess.

15. Finding Nemo: The Musical – Another stage show! I’m not sure how these three ended up together, but this one surprised me a little. Not that she does not like it, but I did not think it would beat out Ariel. Nemo is my favorite stage show in Walt Disney World, so maybe there was some parental influence here, but I can see the child appeal with the great songs, dynamic puppets, and familiar story.

14. The Jungle Cruise – Butterflies reaching 12 inches in length (and up to 1 foot), elephants that don’t pack their trunks, 2 head for 1 sales, the back side of water! You can see the child appeal here I’m sure.

13. Dumbo – A child favorite and recently given a new location in Storybook Circus (which we have not seen yet). My daughter always likes to ride Dumbo, although it is not her favortie spinner (keep reading).

12. Mickey’s PhilharMagic – For whatever reason my girl is not big on the 3-D movies at Disney World. I don’t know if it is the darkness, the glasses, or her father reciting all the lines to Muppet*Vision (sorry, everyone around me), but this is the only one she really, really goes in for. Probably because she knows all the characters and songs, but she also enjoys trying to grab Ariel’s gems (not a euphemism…she’s 3!).

11. Kilimanjaro Safaris – Animals and lots of bumps. What else do you need?

10. The Magic Carpets of Aladdin – When the Carpets get knocked (and they do a lot), they get knocked as a kiddy ride (as if that is a terrible thing to have in a theme park). Well, it is a kiddy ride because kids like to ride things too. When my daughter starts complaining about Rock ‘n’ Roller Coaster being an “adulty” ride that messes up the aesthetic on Sunset Boulevard, I will start listening to the kiddy ride argument.

9. Beauty and the Beast Live on Stage – I am pretty sure this show was made for little girls. It is a princess story with lots of beautiful songs trimmed down to about 20 minutes…perfect.

8. it’s a small world – Yes, it is repetitive, but my 3 year old is also capable of watching the same episode of Doc McStuffins 8 times in one day.

7. Peter Pan’s Flight – Another classic that proves that what was good for the kids 50 years ago is still good.

6. Prince Charming Regal Carrousel – This is probably the least “Disney” ride at Disney World, but my daughter can not resist its charm. Even though it is aimed at boys now (it’s Prince Charming’s Carrousel…see, now boys love it) she is still always up for a horse ride.

5. Soarin’ – The first of the surprises in the top five, although less surprising when I thought about it. You see, my girl got to ride it on our last trip and rode it four times in one day. She can recognize the music immediately and now associates the smell of oranges and pine with this attraction. 4. Toy Story Mania – This was the most surprising entry to me. Not that she does not love Toy Story, but she has never gotten the hang of the firing mechanism in this ride. She can do it, but not really aim so well. I guess it is fun even if you are not winning (I wouldn’t know).

3. The Seas with Nemo – Actually, my daughter loves this whole pavilion. The Nemo ride, Turtle Talk with Crush, and what is left of the aquarium can entertain her for about 90 minutes on any given day. I know it is not what it once was, but that does not make it a waste of space.

2. Splash Mountain – The last top 5 surprise is another not quite kid ride (has a height requirement). She was actually not sure about this the first time she rode, but has since fallen in love with the characters and music. I am still not sure if this is really her second favorite, but it is what she said.

1. The Many Adventures of Winnie the Pooh – Unlike number 2, I am positive this is my daughter’s favorite attraction. She has been saying this is it since she was one and a half, and that was before she knew who the characters were. It is a very well done ride and I wish more people would get over their sadness over Mr. Toad’s Wild Ride and appreciate Pooh for what it is…a 3 year old girl’s favorite ride.

So there you have it. What I find interesting about this list is that some of the widely mentioned “best” attractions are still here (namely Splash and Soarin’), yet some of the lesser mentioned attractions are here too (like Nemo and the Carrousel). If you wondered who could possibly enjoy the Magic Carpets, now you know…it is there for the kids. The top five also come from three different parks, dispelling the notion that only the Magic Kingdom is child friendly.

A few parting notes: Big Thunder Mountain Railroad was under refurbishment the time we visited after my daughter crossed the 40 inch height line, so she has yet to ride it. Other than that she has done just about every ride and show available so if something didn’t make the list she probably just doesn’t like it.

I would love to hear in the comments below what your children’s favorites are. Disney parks are certainly not just for kids, but we can not forget about them either. 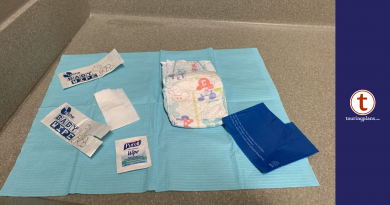 Dealing with Diapers and Potty Training at Walt Disney World